The Pew study that came out this week revealed that in just the last seven years the median age of Mainline Protestants went from 50 to 52. Looking at stats like that, you have to wonder if we’ve reached a tipping point.

That’s a hard pill to swallow. I don’t know of a better communicator in the church than Andy Stanley. He didn’t use the word “shame” lightly.

But consider what the 17th Century Puritan John Flavel said:

Of course, the devil doesn’t do that by whispering in young people’s ears. It happens, mostly, because the world is a fallen, broken place full of fallen, broken people who prey on the weak and vulnerable.

Jesus changed that. He said that that young people have angels in heaven who see the face of God in heaven and woe to those who harm his little ones.

His followers changed the world. Eric Metaxas wrote about how the church challenged the thinking of the ancient world about children:

Into this world came Christianity, with its condemnation of abortion, infanticide and child abuse, its glorification of faithful marriage. … This ethic, which the Western world takes for granted today, is a direct heritage of Christianity.

There was a time when the church thought about how much God loved young people. The church improved the status of children so much we are incapable of imagining how bad it used to be. What does the future hold for children if the church puts the needs and desires of 50 year olds ahead of teenagers?

If you write “Family” on your calendar you can tell people you have a commitment on that day.—Carey Nieuwhof

What breaks my heart is in the United States hundreds of thousands wake up on a Sunday and church never crosses their mind.—Andy Stanley

Business did not make systems up. God is a God of order.—Jenni Catron

We need to introduce systems at our staff’s point of need.—Jenni Catron

People out of their faith and obedience to God have given their resources and because of this you have a paycheck.—Jenni Catron

What is this generation of students worth? It’s worth everything.—Andy Stanley

Thom Rainer has a list of 7 reasons why some members of churches don’t want them to grow. It’s a pretty good list when even the pastor can say, “Yeah, I get that. Sometimes I feel that way.” For example:

Loss of memories. I recently heard a poignant story from a lady whose church was demolishing the old worship center to build a new one to accommodate growth. She and her husband were married in the old worship center. She understandably grieved at the loss of that physical reminder of their wedding.

Others I don’t find as compelling. My favorite not-a-good-reason is number 5. (Or maybe I should write like a click-bait headline: “Number 5 will make you roll your eyes. Again.”)

The Pew Center has released some interesting new data on public attitudes about Same-Sex Marriage.

Polls and surveys are tricky for two reasons. The first is methodology: was the survey properly taken, did they get a representative sample, and so forth. The second is suitability: is a poll really the right tool for the job? Years ago, the Harvard Lampoon published a parody edition of USA Today featuring the headline: “Chromium Heaviest Metal: Poll Finds.” The poll might have found it, but chromium isn’t the heaviest metal.

Anyway, I was interested in this bit of the poll:

Among the groups most likely to favor same-sex marriage in 2014 were Millennials (67%), Democrats (64%) and people without any religious affiliation (77%).

(Some of my previous posts on this topic.)

Ed Stetzer reminds Sunday School teachers to make sure that children know the story instead of just a bunch of Bible stories. He’s right, and that’s something the preacher needs to be concerned about too.

I saw this sign during a nature call on the Parks Highway near Mt. McKinley. 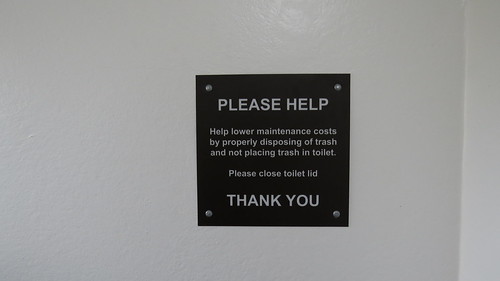 The sign assumes you want to help, or are at least willing to help, and only lack instruction about how. It says that doing this badly has a financial impact, but doesn’t make threats about removing the toilets or replacing them with pay toilets.  Then it assumes you’re willing to do something to make the next person’s experience more pleasant, and says how: by closing the toilet lid.

But beyond that, look at the language. It’s not regulatory but invitational. “Please” do this. “Help” with that. Some people would write the sign “Do not dispose of trash in the toilet,” but this is much better.

Donald Miller: the difference between an artist an an entertainer. We want our worship to be enhanced by the contributions of artists. We don’t want entertainment. (Truthfully sometimes we do want, but it’s a desire we should resist.)

Somewhere I read a line that said: Instead of giving things up for Lent, take something on.

That’s a good word. But if you still want to give something up, here are some ideas: Forty things to give up for Lent.

Here’s a “college-friendly” list of things to give up. Here’s another list that reminds us it’s not a second crack at New Year’s resolutions.

Good piece by Thom Rainer listing seven myths about a pastor’s workweek. I don’t know where he gets his data, but it’s all true in my case.

Fine with me: Most Americans Say the State Should not Define Marriage.